The beautiful thing about football is that it can take you all over the world. 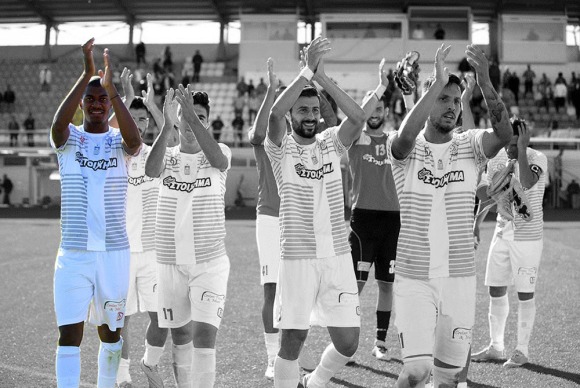 Sanderson started his career at Colchester United and after making a couple of appearances for their first team in League One, and a loan spell at Chelmsford City, he left to join National League South side Ebbsfleet United.

After a year with Ebbsfleet, including a couple of loan spells at Lewes and Grays Athletic, the 22-year-old joined Chania in the second tier of Greek football last year.

This season has been a challenging one for Chania, with several managerial changes affecting their side’s performances on the pitch. The season started with Thomas Grafas in charge, before he was replaced by Georgios Lyronis in November. Gefas then returned in March and Chania’s form has picked up significantly.

With four games remaining in the season, Sanderson talks to EPA exclusively about his ambitions for the future and how a familiar face helped him settle in his new surroundings.

English Players Abroad: After playing for a few clubs in England, how did the move to Chania come about?
Jordan Sanderson: The move to Chania came about after I had been on a series of unsuccessful trails with English clubs during pre season. The English season had started and I was without a club. My agent gave me a call and said Leroy Lita is over in Greece, we are with the same agency, their season hasn’t started [yet] and they are still in pre season, would you like to go over for a trial. I went and they liked what they saw so I signed.

EPA: Leroy Lita played alongside you at Chania for a while, did that help you settle in?
JS: I hadn’t met Leroy prior to coming to Greece [but] obviously I had heard of him given the career he has had. He was a massive help to me during his time here, almost like a big brother, and I learnt a lot from him both on and off the pitch.

EPA: How have you found adjusting to life in Greece?
JS: The main thing for me was to adjust to the weather. When people come to hot countries like Greece, it’s usually for a vacation and to relax so training in 30° of heat was very different to me but after the first month or so, I was fine. Life off the field wasn’t so hard to adjust to [as] I’m a very laid back person so the lifestyle of the people here suited me.

Highlights from Chania’s 6-2 loss to Super League side PAOK in the group stage of the Greek Cup. Sanderson was involved in the build-up for Chania’s first goal, which gave his side the lead. Leroy Lita scored Chania’s second goal.

EPA: How would you describe your style of play?
JS: I see myself as a ball player. I like the ball and the technical aspect of my game is something I pride myself on. Since being in Greece, I have developed a different aspect to my game. I feel defensively my game has improved a lot and that’s massive for me because I know I can play with the ball so to be able to come here and develop that side of my game has really helped me.

EPA: With the Greek football season coming to an end, how would you describe Chania’s season?
JS: The season for us has been filled with ups and downs. We started well. We were in a good position coming into December [and] I think if we had turned some draws into wins, we would have been in a very good place. The change of management unsettled things more than they should have and consequently we paid for it. Not winning a game for five months was mentally draining for all the players. Even when we were playing well and creating chances, we couldn’t finish games and teams were punishing us for it. We [then] saw another change of management with the first manager being reinstated. Now we find ourselves fighting for survival with four games left to play but winning our last two games has boosted the morale of the team, and hopefully we can fight until the end and survive.

EPA: From your experiences, would you encourage more Englishmen to play their football abroad?
JS: If you have the opportunity, go for it. You never know what may come from it at the end.

EPA: What are your ambitions for the future? Are there any other countries you would like to play in?
JS: My main priority at the moment is to make sure the team are safe and what ever happens after that happens. The beautiful thing about football is that it can take you all over the world. I’d be open to play in many countries if I felt it was the right thing to do for my career at the time.

EPA: Finally, who is the best player you have ever played with or against?
JS: I’ve never played with or against any big named world class players but [I have played with] a lot of very good players, so it’s a hard one for me, but I’d have to give it to my Portuguese team-mate at Chania, Hugo Machado. The guy is a magician at the age of 33 and also a great guy off the field. [He is] always playing jokes, so yes, it’s been a pleasure to play alongside him.