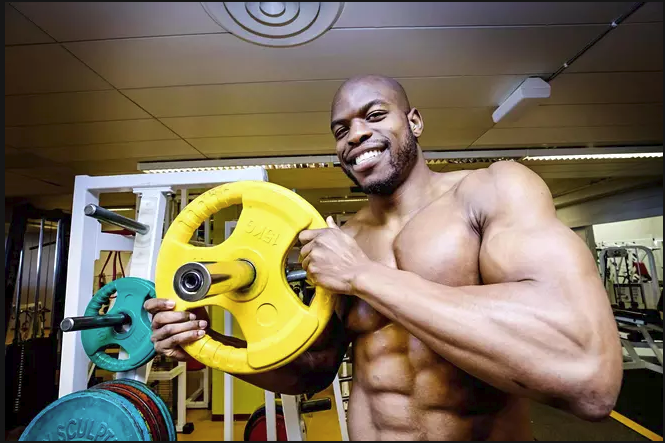 With Adebayo Akinfenwa’s fame and celebrity personality away from football continuing to grow and grow, there is one striker who has quietly built up a successful career away from his homeland but who still has the strength and physique to match the Wycombe Wanderers forward.

Hakeem Araba is not your usual striker. Weighing over 100kg and standing at 6 foot 3, the 27-year-old has the physique of a body-builder. He also had a cameo role in the 2004 film Calcium Kid, which starred Orlando Bloom. But what really makes Araba stand out is his career path. Since leaving Whitehawk in 2013, he’s played for six different clubs in five different countries. And he still has his best years ahead of him.

“It’s not easy moving every year, learning cultures and languages,” he says. “It’s not ideal but it’s been interesting. It’s given me the chances to explore new and different adventures.”

He’s certainly had a lot of those adventures. Having started his career at Peterborough United, Araba would go on to make his way round many of the best non-league sides around London and Essex, from Dagernham & Redbridge to Billericay Town, Bromley and East Thurrock. He then moved further south to Brighton-based side Whitehawk but five years ago, he decided to try something outside of his comfort zone.

“I was having a good time in non-league but I wanted to get back into professional football again. The move came through one of my best friends who’s from Cyprus. He invited me over for a holiday when the season finished and while I was out there, I trained with his uncle’s team for a few days and then things happened from there.”

The club he joined in Cyprus was AEK Kouklia, a side based in the popular holiday resort of Paphos who were playing their first season in the top flight. Despite his side hovering above the relegation spots for most the season, Araba’s first season abroad was a success. He was his side’s top scorer having fired seven goals in seven different games, proving to be invaluable in Kouklia’s push for survival.

After a year in Cyprus, Kouklia dissolved to merge with another side from the region so Araba was on the move again but not far, as he joined Greek Super League side Panthrakikos in 2014. His move to Greece saw him make just seven appearances and after half a season, an opportunity to take his game to Scandinavia arose and it has proved to be one of his best career moves. Three years on, he has only just left the region but he he continued his nomadic existence whilst there, regularly earning moves to bigger clubs. Three years in Scandinavia saw three different countries and four different clubs.

“It does takes time to settle,” he says. “It depends a lot on the language and your teammates but after a while you get used to it and just adapt to the lifestyle where you are.

“Looking for an apartment and living in hotels is not easy in the first moments when you arrive at a new club but the clubs always help you on that aspect with getting the basics done.

“Having good teammates also helps you deal with your spare time because you’re with your teammates most of the time.”

Despite admitting it takes time to settle, Araba looked at home on the pitch as soon as he joined top flight Swedish side Falkenberg in 2015. He scored eight goals, including scoring in a remarkable six games in a row in the first couple of months of the season. His impressive performances meant he remained at Falkenberg for another season and was nicknamed by the club’s fans ‘Superman’.

He then moved on to play for second tier Danish side Næstved before returning to Sweden to play for Örgryte. He has most recenly played for Finnish top division side Kemi Kings, the former side of fellow Englishman Billy Ions.

The last few years since his barnstorming start to his career with Falkenberg have seen the 27-year-old contribute less goals but he offers so much more to his sides than a goal scoring threat. His size allows him to bring teammates into the game with his impressive hold-up play and he can make a significant impact after being introduced from the bench, bullying tired defenders.

Araba is now on the lookout for a new club and no doubt the experience he has gained across the globe will help him find a new club but after all this time abroad, what exactly has he learned and enjoyed the most?

“I can speak fluent Swedish now and speak some Greek,” he says. “It’s hard to say where my favourite place to play is but living in Paphos, Falkenberg and Gothenburg were really nice places to live. I would say the fans as well in Sweden have taken to me the most, as I’ve played a lot of games there.”

As for the future, Araba will continue to go wherever his career takes him with the same mentality he has carried throughout.

“My ambition is to play as high as possible. I don’t really have anywhere in mind to be honest, God’s already made the plan and I’m just following my path wherever it may be.”

It’s been great to find out more about Araba, the man behind the journeyed career. His experience is definitely one he would love other Englishmen to have as well.

“I would definitely recommend English players to move abroad,” he says. “It’s a opportunity to find yourself and to learn something new like language, culture, and style of play. It’s really helped me to grow up and experience things that I could never have imagined.”

Now that he has shared the experiences which have shaped a remarkable career so far, there is just one more question for the 27-year-old striker to answer, who’s stronger? Him or Akinfenwa?

“There’s only one winner there!”